How to Find a Revolutionary War Patriot 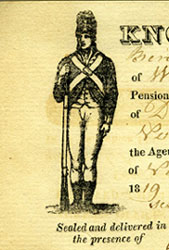 After earlier skirmishes, the American Revolutionary War started with the battle between British troops and local Massachusetts militia at Lexington and Concord, Massachusetts, on 19 April 1775. It ended eight years later with the signing of the Treaty of Paris in 1783. If you have been able to trace your ancestry in America back to those years, you have an excellent chance of finding at least one ancestor who had some type of service related to the Revolutionary War effort.

In fact, your ancestor may have been a Patriot or a Loyalist. We don’t celebrate the efforts of Loyalists very much in the United States, but go north to Canada and you will find that Loyalists are well documented and honored as heroes. They are especially honored for their contribution to the development of Canada. Perhaps one Canadian in ten has a Loyalist ancestor, and many people with English blood who live elsewhere – in the United States, in commonwealth countries such as Australia and New Zealand, or in nearly any other country round the world – are also of Loyalist descent. Visit the United Empire Loyalists’ Association of Canada web site at http://www.uelac.org/ for more information.

If you have already documented your U.S. ancestry to 1760 or earlier, you already have an excellent chance of finding either a Patriot or a Loyalist in the family tree. Boys as young as 16 were allowed to serve, so any male ancestors born in 1760 or earlier are possible veterans. You can even find a few younger boys who served as drummers or assistants in the Revolutionary War and later were credited as veterans, even though they were not considered soldiers during the war itself.

Those who didn’t serve directly in a military capacity may have helped in other ways, such as providing goods, supplies, or non-military service to the cause. Women also participated in the American Revolution, sometimes as spies, and a very few even fought in battles while disguised as male soldiers.

If your ancestor served as a Patriot and lived long enough after the war to apply for a pension, you can probably find a pension application for him. Almost all federal pension applications have survived, even the applications of those who were later turned down. In most cases, the veterans had to prove they were true veterans and therefore eligible for pensions. The “proof” often consisted of testimonials from relatives, neighbors, or from other military veterans with whom they served. Such testimonials often provide a wealth of genealogy information, frequently mentioning parents, spouses, siblings, and children. Even the applications that were eventually rejected can be valuable to today’s genealogists.

Before 1818, national pension laws concerning veterans of the Revolution specified disability or death of a serviceman as the basis for a pension award (with the exception of the Continental Congress resolution of May 15, 1778, granting half pay to officers for service alone). On March 18, 1818, the U. S. Congress granted pensions to Revolutionary War veterans for service from which no disabilities resulted. Officers and enlisted men in need of assistance were eligible under the terms of the 1818 act if they had served in a Continental military organization or in the U. S. naval service (including the Marines) for 9 months or until the end of the war. Pensions granted under this act were to continue for life.

Congress passed another service-pension act on May 15, 1823, which granted full pay for life to surviving officers and enlisted men of the Revolutionary War who were eligible for benefits under the terms of the Continental Congress resolution of May 15, 1778, as amended.

The last and most liberal of the service-pension acts benefiting Revolutionary War veterans was passed on June 7, 1832, and extended the provisions of the law of May 15, 1828 to even more veterans. The act provided that every officer or enlisted man who had served at least 2 years in the Continental Line or State troops, volunteers or militia, was eligible for a pension of full pay for life. Naval and marine officers and enlisted men were also included. Veterans who had served less than 2 years, but not less than 6 months, were eligible for pensions of less than full pay. While thousands applied for pensions under the earlier acts of Congress, this final act of 1832 was the one that saw the most applications.

In 1832, all of the living veterans would have been at least 72 years old. Many had already died, either from war injuries or from unrelated causes. In many cases, widows of veterans applied for benefits based on a husband’s service. In most cases, widows’ applications provided even more family information than did the applications received from actual veterans.

On July 29, 1848, Congress provided life pensions for widows of veterans who were married before January 2, 1800. All restrictions pertaining to the date of marriage were removed by acts of February 3, 1853, and February 28, 1855. On March 9, 1878, widows of Revolutionary War soldiers who had served for as few as 14 days, or were in any engagement, were declared eligible for life pensions. This was still an issue in 1878 because many older veterans had married younger women, resulting in a large number of widows obtaining benefits 108 years or more after the birth of their husbands.

RootsWeb at http://wc.rootsweb.ancestry.com is another good place for identifying Patriot ancestors, although the site is not easily searched. The information there is submitted by other RootsWeb users so accuracy is not guaranteed. In fact, the site is plagued with many errors but you will find it easier to start with other people’s research and then gather the required documentation yourself from other sources that is needed to validate the research than to try to research something entirely from scratch. As always with any genealogy claims, you need to independently verify each piece of information you obtain on RootsWeb.

Census Records for 1790 and the early 1800s also can be very helpful in identifying Revolutionary War ancestors. The census records may be found on MyHeritage.com, Ancestry.com. FamilySearch.org also has many census records available online although not all of them.

If you are unsuccessful at proving connections via the above online resources, you will need to resort to printed books and microfilm images as many of the needed records are not yet online.

A DAR Patriot INDEX (not the full records) is available at http://services.dar.org/public/dar_research/search/?Tab_ID=1.

Other books to be searched include numerous compilations or source records from various states, land grants made years later as a result of Revolutionary War service, and even books about various generals and admirals that may mention some of the men who served under them.

You can find many such books in your local library and at Google Books. For example, I looked in Google Books and found a biography of Revolutionary War Captain John Paul Jones that mentioned one of my ancestors, a Marine who served on board the Ranger under the command of Jones. You never know what you will find until you look!

As with any genealogy effort, a bit of perseverance may provide records you never knew about – and very possibly contribute facts about your ancestors that you never knew.